Types are not boxes! 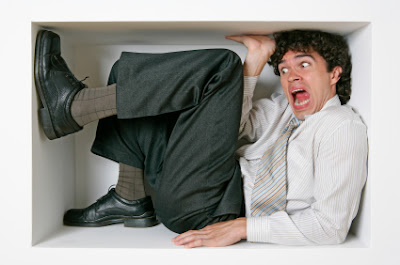 People sometimes object to socionics or typology in general, thinking that having a type limits you to being in a particular "box". First of all, typology is not prescriptive: it only claims to describe differences that are already there. Assuming that you're typed correctly, it's just a new kind of knowledge about yourself, not a new law that you have to follow. Surely if you had, say, a disease or a special talent you would want to know about it, right? Then you could seek out a cure for the disease, or actualize the talent and use it for good. Going to the doctor doesn't make you sick, it just tells you if/how you are sick — or in the words of Tupac, "I didn't create thug life, I diagnosed it."

But socionics does one better: Model A essentially says that we have all of the types within us, all of their basic functions and skills (as the eight IM elements) — only differing levels of access to them, with some being easier to use and others harder or more difficult to keep up. The leading function is "you", but it's merely the baseline state — you can "fake" being another type for a limited period of time, and in a sense we do this all the time when we use our other functions.

It's like the idea of a harmonic oscillator from physics. One example of a harmonic oscillator is a mass at the end of a spring: it has a normal state where it extends out a certain distance X. You can stretch it to extend beyond X, but if you let go it will contract, oscillating until it gets back to the equilibrium point X. Similarly you can compress it to a smaller distance than X, but it takes work. So the leading function is like the distance X, with other functions being closer or further from that equilibrium (and particularly the bold functions will be closer to it).

The functional, fractal (self-similar) nature of Model A — touched on but not elaborated by Jung — is so popular that other typologies are now adopting it: Beebe's 8-function model for MBTI, and tritype for Enneagram where people speak of "my 9 [fix]" as if it were an aspect of their personality, like the Model A functions.


Socionics has only 16 types, but clearly there are more than 16 kinds of people. Each sociotype therefore has to contain a wide variety of people, so as to cover approximately 6% of the world's population.

Socionics enthusiasts sometimes use "comparison typing", i.e. typing others based on comparison with other, already-typed examples. So if your brother is IEE you might determine whether others are IEE based on whether they are similar to him, whether they have a similar energy level, interests, level of skepticism, etc.

To some extent this is unavoidable and actually beneficial: comparing with known examples is a quick and easy way to type. BUT, it should only be used positively: if someone is similar to a known example then they are likely to be the same type. But if they are dissimilar then they may simply be a variant of the type that you haven't seen yet. If you are relatively inexperienced in socionics then the probability of this is higher — but no socionist can assume that they've seen all variants of the types.

Secondly, even when you do comparison-type, you should always attempt to describe clearly what similarities you're seeing, and how they're related to socionics. Not all similarities are related to socionics, and in fact, energy level and interests vary widely within types. If you don't give a theoretical explanation then you're essentially building your own idiosyncratic typology, which is probably going to be less coherent than Model A, not to mention impossible to discuss with other socionists.


A more subtle issue is when there is not an explicit comparison, but when someone types based on what is absent from a person rather than what is present. This is again negative typing, and generally speaking not the right way to type. It can trip up beginners even when they have a solid understanding of the theory.

For example, "mobilizing Se wants to look fierce, [but he doesn't]". This is based on a specific attribute that the typer associates with mobilizing Se.

This is an argument based on what is not there, not on what is there. It's essentially appealing to comparison with known examples. You may not know any mobilizing-Se types who don't want to look fierce, but that doesn't mean that they don't exist.

If you use a general trait that really does get close to the essence of mobilizing Se (such as restlessness or desire for impact), then it would be valid to use negatively. But this example seems too specific for that. It would be better to look at what is present, and see what that says about the subject's relation to Se, where it would best fit in their Model A.


People often complain about "stereotypes". But stereotypes are stereotypes for a reason — they just shouldn't be used negatively, to exclude people from a type. For example, if someone greatly enjoys participating in the performing arts then it's evidence towards being EIE, or some type with high Fe. But clearly the majority of EIEs are not performing artists, and no one in their right mind would say "he's not an actor, so he's not EIE". And if you dig deeper, of course you might find the performer is not really motivated by the emotional interaction he's having on the audience, but something else. Maybe he got into the field by accident (like Harrison Ford). But this is less likely, because performance is closely tied with Fe.

Converse error is a logical fallacy: if A implies B, it doesn't necessarily mean that B implies A. This is essentially why negative typing doesn't work. But socionics is empirical (although not quantitative), so rarely do we have strict implications going from observation to type. As mentioned above, just as not every EIE is a performer, not every performer is EIE even though it's more likely for them to be EIE than SLI.

Technically the right framework to use is Bayesian inference, which tells us how to update probabilities using observation. We start by assuming a roughly equal probability for any typing to be correct. If the person to be typed is in a community that skews a certain way type-wise, then you might not assign equal probabilities. Or if you believe that the type distribution is heavily skewed (which I don't).

Here P(X) means the probability of X, H means the hypothesis (the typing in question, e.g. EIE), and E is the evidence (the subject in question being a performer).

In other words: if 2% of the general population are performers, and 4% of EIEs are performers, then we'll double our probability of the subject being EIE, to being 1/8 = 12.5%. And if three times as many EIEs are performers as everyone else, then we'll triple it, to get 18.75%. So the small percentage 4% becomes significant when considered relative to the other types. 12.5% is still somewhat low, but if we have many pieces of evidence like this we can form a good case.

Of course, it's typically very hard to assign exact probabilities to a claim — in life in general, much less in the notoriously ambiguous field of socionics diagnostics, where you may not even be sure what you think. Nevertheless, the general principle still applies.

So, no more criticizing stereotypes! Negative arguments and comparison typing are the real issue.
Posted by Ibrahim Tencer at 8:17 AM