The Model A cube

Note that Augusta actually was aware of this cube and mentioned it in a 1985 article on the Reinin dichotomies. However, the idea that the relationships are transformations of the cube was not mentioned.

But in reality, Model A is neither a line nor a grid. It's a cube. It is not 1-dimensional or 2-dimensional, but 3-dimensional.

That is to say, you can arrange the functions of Model A like so: 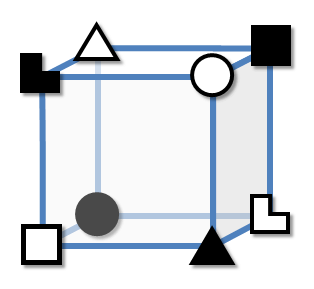 And when you do, the intertype relationships become symmetries of the cube. The top and bottom faces of the cube are the mental and vital loops.

Let's say that this placement of the cube represents LII, so that the closest bottom edge represents the ego block, with the leading function on the left. Then

Supervision can be replaced with benefit as the rotation to produce a "Model G cube" as it were, making the benefit rings apparent instead of the supervision rings.

Duality can also be replaced with extinguishment as the vertical reflection.

And comparative can be replaced by any of the "odd" relations - the ones that reverse the Process/Result dichotomy.

These three choices determine the model, so that there are 2*2*8 = 32 versions. The one above is the "dsk" (dual/supervision/comparative) cube. In all cases, the possible transformations are exactly the ones that preserve the cube itself and preserve the vertical axis. Half (eight) of them reverse the cube's orientation and half of them preserve it. In the dsk cube the orientation corresponds to the Negativist/Positivist dichotomy.

The diagonal reflection (which is the comparative relation in Model A) fixes half of the functions. We can expand the cube to a 4D hypercube, and Model A to a 16-function model, so that no relation fixes any functions: 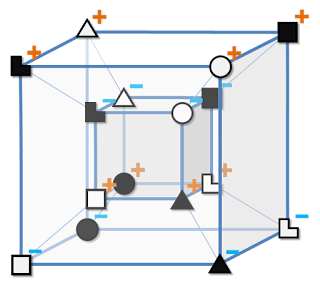 In this case we can actually identify the types with the IM elements. I interpret this to mean that each type has an overarching goal in life, which is the leading function. Typically these are written as "signed" versions of the regular IM elements:


The elements of Model A (and any other cube model) are coarser versions of these elements, e.g. Ti is just +Ti and -Ti (LSI and LII) grouped together.*

Because types are identified with IM elements, in the 4D model we can simply choose which relations are adjacent to the type:

There is much more to say about the cube, but this will do for now. This is the perfect logical system underlying socionics.

* Notice also that although the look-a-like relation is also a diagonal reflection in the Model A cube, it technically defines different elements than the comparative relation: Reasonable EJ, Reasonable IJ, Merry EP, Merry IP, etc.
Posted by Ibrahim Tencer at 9:15 PM No comments:

Ti valuing types are sometimes criticized for ignoring empirical data if it is not consistent with their views. The argument, so it goes, is that empirical data is real or factual, and views can be changed, therefore the empirical data takes precedence over any prior belief that one may have concerning it.

While this is true, it can be misleading if taken too far, and in fact seriously impeded the progress of science on different occasions in history. One is the discovery by Galileo (ILE) that all objects in free fall will fall at the same rate. Typically if you drop a feather and a bowling ball they will not fall at the same rate. But as we now know, this is due to special conditions that exist on the Earth's surface (air resistance) and in no way contradicts the more basic and fundamental truth. Galileo presented an argument to this effect, but it is said that he did arrive at this fact empirically, by cleverly choosing an experiment in which air resistance wouldn't be a factor. The whole idea of doing controlled experiments in fact does mean "ignoring facts" or rather assuming a certain model of the world, in which the other factors are thought not to matter. (An assumption which may not be valid depending on how the experiment is set up.)

Another example is the Copernican model of the solar system (or rather the universe as it was known at that time). In fact the Copernican model was not much more accurate than the Ptolemaic model, although it did require fewer epicycles. The backlash it suffered is not unlike the reactions faced by proponents of speculative or revolutionary theories today, even if the one was supposedly based on religious dogma and the others on hard-nosed skepticism.

What this suggests is that reasoning from facts (Te) is not enough. One may also reason based on ideas or pure logic (Ti, with intuition). The most extreme example of this in the history of science is the theory of general relativity by Einstein (also ILE). Unlike quantum mechanics, which was cobbled together from various different observations, and whose interpretation and principles are still in dispute, Einstein started out with a clear physical principle: the laws of physics should be invariant under smooth changes of coordinates. Since there are many different ways of describing the same situation with different coordinates, it should not matter which ones we use. To this he added some empirical requirements, like reproducing Newton's laws in the limit — but in fact, he too was misled by this! He became stuck, trying to reconcile the idea with the "empirical" data. It was not until he realized that in fact coordinate invariance was the primary requirement (and the so-called facts required subtle modification) that he finally completed the theory. Empirical evidence for general relativity actually remained somewhat scant for many years. Another point to note here is that it is easy to confuse an interpretation of the facts (like a "proven" past model) for the facts themselves. All observations except the most basic are tied up in some way with interpretation.

So, as one might expect, the approach I (LII) use to develop socionics uses a great deal of a priori reasoning (while of course making use of both). It's like you have two masses, one consisting of knowledge that is known to be true by reasoning, and one consisting of all observations of the world. You can then bring them together by moving either point towards the other, or both, until they meet in the true model. In fact, a priori truths may seem disconnected or cover different domains (like general relativity and quantum mechanics), and themselves require unification. Our basic physical understanding of the universe has been stuck for decades, and what we need to move forward is a thorough re-examination of the concepts underlying the theories, starting with what is absolutely clear and building on top of that until everything has been "digested" into an indisputable form, or else cast aside as remnants of past confusion. This is a huge task, but it can, and will, be done.
Posted by Ibrahim Tencer at 7:08 AM No comments: