Quadrality and the Theory of Triads 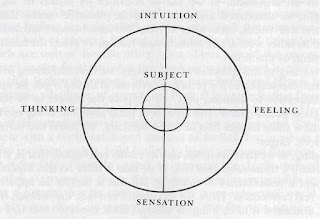 Socionics is indisputably based on quadrality. Because it's built on dichotomies, everything is groups of two, then four, eight, sixteen (4 times 4), and so on. Model A is conventionally depicted as two rings, and for the types we have supervision and benefit rings, quadras, clubs, and so on. But what has not been mentioned up until this point is that, in practice, these groups of four (whether they are types, functions, elements, etc.) often manifest as groups of three - the fourth one remains hidden.

Example 1: Among the valued functions, the suggestive function is often out of sight, due to being weak and cautious. While it is an unconscious goal, people rarely prioritize it in practice - it's as if they are unaware that they need it. The remaining values (functions 1, 2, and 6) are manifest values.

Example 2: Among the strong functions, the ignoring function's goal is sometimes neglected to the point where it looks weak, due to being both subdued and cautious. We can use it when needed occasionally, as it's less stressful than the 1D functions, but not much beyond that. So, much like the suggestive, the lack of these two traits "overpowers" the presence of the third. This leads to club triads, e.g. the "Fe SF triad", the "Ni NT triad", etc. The remaining strengths (functions 1, 2, and 8) are manifest strengths.

Example 3: Among the weak functions, the mobilizing function is both valued and bold, so while clumsy and overconfident, it can be the "slow and steady one that wins the race", often developing habits over time that allow us to achieve its goal adequately for ourselves. The remaining weaknesses (functions 3, 4, and 5) are manifest weaknesses.

Example 4: The creative function, although cautious, is used with far less fatigue than the other cautious functions, to the point where it works together with the leading function amicably.

Example 5: All of the producing functions can be "blocked" with the leading function to define the type, however the vulnerable function is much more rarely used in conjunction with it. Similarly it is the one left out of the mental ring, being almost completely neglected compared to the others.

There are plenty more examples on the semantic side, to give a few:

There are even more examples beyond socionics:


Jung was particularly prescient on this topic. He would create mandalas, a kind of four-fold diagram made of a square or cross combined with a circle. He interpreted this as an archetype of wholeness, unification of opposites, and eternal evolution and rejuvenation of the Self. The triad is by comparison incomplete, deficient:

Adding a fourth to an already established three has a transformational effect. In geometry, a fourth point transforms the two-dimensional triad or triangle into a figure with depth, the cube and the tetrahedron (a form lapis). As the mathematician Michael Schneider observes, “There are always four ways (another quaternity) to look at any three-dimensional structure: as points, lines, areas, and volumes, or as corners, edges, faces, and from the center outward (63). Ellenberger notes that “The quaternity can appear as a geometric figure of square or sometimes rectangular shape, or it will have some relation with the number four: four persons, four trees, and so on. Often it is a matter of completing a triadic figure with a fourth term, thus making it into a quaternity” (712). Jung searches for the quaternity when a trinity is encountered, “Jung over and over again in his writings returns to the alchemical question: “Three are here but where is the fourth?” (Edinger 189). The completion of the quaternity is seen frequently in alchemical works, even whimsically, “All things do live in the three/ But in the four they merry be” (quoted in CW 12 125)." [Source]

Augusta may have been inspired by this to complete Freud's triad of ego, id, super-ego with "super-id" (although the analogy with the actual functions is a bit weak).

Dualization itself is completion of the four quadra values from two overlapping threes, where your leading function completes your dual and vice versa.

The theory of signed elements completes the three function dichotomies with a fourth, to produce 16 functions.

But socionics as a whole is based on Jung's four functions and is in this sense already complete. So the question becomes, how do we derive the three from the four, the appearance from the reality? Each triad is such a derivation.


"The goal of psychic development is the self. There is no linear evolution; there is only a circumambulation of the self" (Jung, MDR 196) 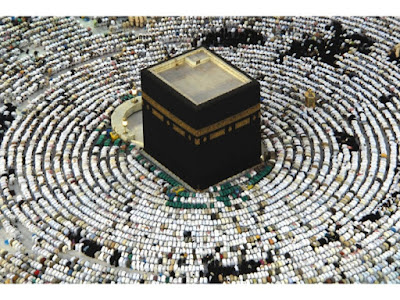 Email ThisBlogThis!Share to TwitterShare to FacebookShare to Pinterest
Labels: theory

Model G and How To Fix It

Jack Aaron and Ben Vaserlan recently had a heated debate over the relative merits of Model G and Model A: why Model G was created and if the reasons really hold up.


Aside from a few minor quibbles (such as the supposed difficulty of telling apart the vulnerable and role functions), I completely agree with Jack's criticisms of Model G. In short, it adds essentially nothing to Model A, is steeped in vague jargon (like "long range" and "short range", the social vs. personal spheres, etc.), and is at odds with how the types actually work (in particular how it conceives of the suggestive function as being somehow "high energy" or more prominent than the mobilizing function — or whatever they're called now).

Model G does, however, have a few selected insights. One is the greater emphasis on the benefit rings, or rather, the bold/cautious dichotomy.

Another is the idea of "energy." For some reason Ben flounders in this video when asked to define energy, while he had previously connected it to Jung's concept of libido (not Freud's), which Jung defined as a kind of "life force". This is a sound idea in itself: Model A addresses information processing (information metabolism) but it does not address the obvious limitations of resources that apply to each function's processing, in particular the strength and boldness traits.

Unfortunately, beyond this very basic outline, the details of Model G seem disconnected with the reality of the types — including which functions are supposedly maximum energy, etc.

That's a very brief take on the semantics — the details are really not that interesting and are addressed in the video. Another interesting idea (which precedes Model G) is the signed elements, but I'm not going to get into that here either. The real point of this post is the structural deficit which I pointed out and Jack later mentioned in the debate. It's very obvious if you look at Andrew's diagrams (and translate the names and numbers accordingly): 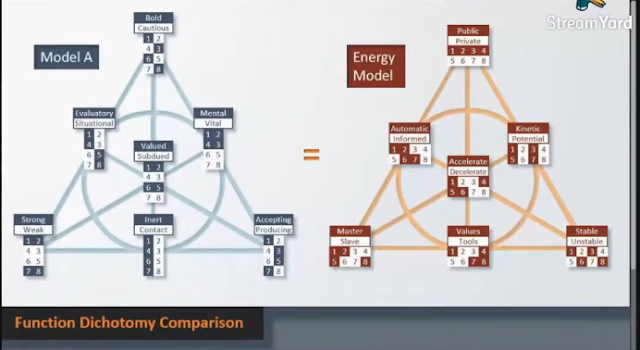 As you can see here, some of the standard socionic dichotomies are presented asymmetrically in Model G. Gulenko apparently does not assign any meaning to the left and right sides of the model, he still uses the standard dichotomies such as strong/weak, etc., albeit with different names, as displayed on the right here. Strong/weak becomes "master/slave" and valued/subdued becomes "values/tools". (correction: It is said that Gulenko does consider the left-hand functions to be "better" in the "sense [...] of energy allocation to the function and the degree of freedom of behavior afforded by this." Again, more jargon which does not seem to apply to the suggestive function, or if not actually wrong, at least is not as clear as the existing Model A dichotomies.)

How can we fix this? The obvious thing to do would be to simply switch the suggestive and ignoring functions (or "manipulative" and "control", numbers 6 and 8). Then the left side is strong and the right side is weak. And the valued functions are "outside" and subdued "inside", which is at least as good as it is in Model A. And we still have the benefit rings proceeding horizontally: NeTeSeFe... and TiNiFiSi....

In my opinion this clearly shows that the Model G blocks are defined wrong. The issue is that Gulenko wanted to have a benefit loop of types, but he represented them using the standard Model A ego blocks (as the columns of Model G). So for ILE we have NeTi, then TeSi, then SeFi and FeNi for the ILE and its Process-Extrovert ring. Instead we should express the types entirely in terms of the benefit ring (in analogy with how it is in Model A and the supervision ring) with each represented using a consecutive pair of elements in the ring, ILE being NeTe, LSE being TeSe, etc. Then the types can be thought of as "edges" between the IM elements, and they interact at their shared points. This makes much more sense if Model G is meant to show energy flow, does it not?

Ben made the interesting point (possibly the only one he made in the entire video) that Model G includes not only benefit rings, but also supervision rings if you extend it vertically:

Note that this property still holds if we switch the suggestive and ignoring functions. There are literally only two ways to make a grid like this, and Model G does not use the right choice.

Aside from the semantic issues with Model G, this is a very obvious structural flaw. Fixing it might be the first step to salvaging the model.
Posted by Ibrahim Tencer at 12:15 PM 4 comments: