Socionics, like other scientific theories (in particular physics), relies on giving meaning to mathematical structures: the elements of a group are interpreted as relationships, and they act on elements of another set which are interpreted as types, etc. While proving things about mathematical structures is helpful for "mapping the structural landscape" and getting a sense of what is or is not possible, it must be complemented and guided by an understanding of what the structures actually mean. This is true even of supposedly "pure" mathematics. Often mathematicians have a vague sense of this, but only enough to "get by" — the deeper meaning is left untouched.

To see what I mean, consider an interval:

We can interpret this as being a scale, where one end is, say, hot and the other end is cold.

Then, if we bend and join the ends of the scale to make a circle: 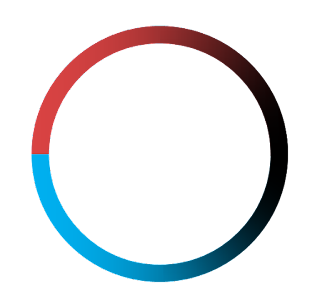 Hot and cold then occupy the same place. But isn't that a contradiction? How can two opposites be the same?

In fact this "unification of opposites" lies at the very heart of socionics. For what is a dichotomy (like sensing-intuition or logical-ethical) itself if not a union of opposites?

We can then notice that, on a semantic level, what the two ends of a scale have in common is that they are both extremes, while the middle of the scale is balance or an equal combination of the two extremes: 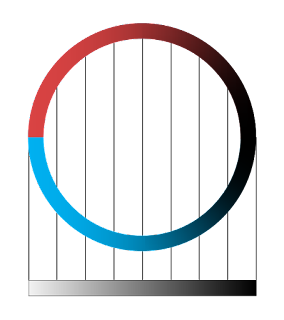 So we have obtained a new scale -- which is none other than the distinction between Se (extreme) and Si (balance)! Or at least one major aspect of it, anyway.

Since any pair of binary opposites can be placed on a scale like this — including Si and Se themselves! — we see that socionics touches on some of the deepest and most universal structure of reality — that point where geometry, meaning, and structure all meet, and produce a self-describing model of reality.

Readers may recognize these concepts from any one of various ancient traditions: Sufism, Hermeticism, sacred geometry, etc. All we are doing here is fleshing them out using the language of mathematics.

The full consequences of this remain to be seen.
Posted by Ibrahim Tencer at 3:03 AM No comments: